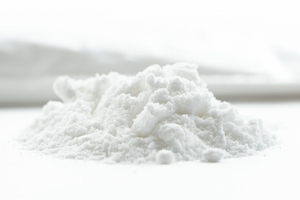 Allantoin, also called 5-ureidohydantoin or glyoxyldiureide, is a chemical compound with formula C4H6N4O3. It is produced from uric acid. Allantoin is a major metabolic intermediate in most organisms including animals, plants and bacteria.
In its organic form, allantoin is found in several plants, such as sugar beet, comfrey, chamomile, tobacco seed, and wheat sprouts.
History

Allantoin was first isolated in 1800 by the Italian physician Michele Francesco Buniva (1761–1834) and the French chemist Louis Nicolas Vauquelin, who mistakenly believed it to be present in the amniotic fluid.In 1821, the French chemist Jean Louis Lassaigne found it in the fluid of the allantois; he called it “l’acide allantoique”. In 1837, the German chemists Friedrich Wöhler and Justus Liebig synthesized it from uric acid and renamed it “allantoïn”.

Extracted from the root of the comfrey plant, Allantoin is a non-irritating ingredient that soothes and protects the skin. With the ability to help heal the skin and stimulate the growth of new tissue, it’s a great all-rounder for keeping skin at the top of its game.

Manufacturers cite several beneficial effects for allantoin as an active ingredient in over-the-counter cosmetics, including: a moisturizing and keratolytic effect, increasing the water content of the extracellular matrix and enhancing the desquamation of upper layers of dead skin cells, increasing the smoothness of the skin; promoting cell proliferation and wound healing; and a soothing, anti-irritant, and skin protectant effect by forming complexes with irritant and sensitizing agents.

Allantoin works by slowing bacterial growth and loosing and softening scales and crust. The keratolytic effect and abrasive and astringent properties of allantoin are used in skin softening cosmetic preparations.
In short, Allantoin is a moisturizing, soothing, healing, anti-irritating, keratolytic and non-toxic agent. Allantoin is a cell-proliferating healing agent which stimulates healthy tissue formation.

TOXICOLOGY
In general, allantoin is non-toxic and safe for cosmetic use.