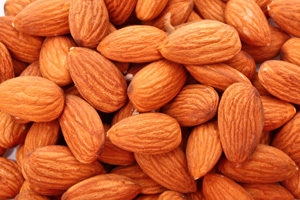 Botany: Almonds belong to the family of roses (Rosaceae) and is relative to cherries, peaches, apricots and roses. It grows to a height of about 7 m and has several varieties – two of them yield sweet and bitter almonds. The tree is native to western Asia and is now extensively cultivated in the Mediterranean countries and in California.

The fruit is botanically classified as a drupe (the same as peach or plum), but its outer portion is leathery, dry, green, bitter and inedible. The almond is its seed.

History and/or Folklore: Almond is one of the oldest cultivated fruits in our civilization. Almonds were known in the Stone Age, and their cultivation dates back to the Bronze Age. References to the almond are found in Greek mythology, the Bible, and in Shakespeare. In the Middle Ages, almonds were commercially important. In traditional Chinese medicine, sweet almond oil (Prunus amygdalinas dulcis oleum) is recommended for strengthening the lungs (which are associated with the skin). Sweet almond oil has been used as a folk cancer remedy for bladder, breast, mouth, spleen, and uterine cancers, amongst others.

Commercial products: Two major types of products are derived from the almond, namely a fixed (non-volatile) oil and a volatile oil. Sweet almond does not yield a volatile oil. The fixed oil is commonly called almond oil, expressed almond oil, or sweet almond oil. It is made from both sweet and bitter almonds by pressing the kernels. It does not contain benzaldehyde or hydrocyanic acid. The volatile oil is called bitter almond oil. It is obtained by water maceration and subsequent steam distillation of the expressed and partially deoleated bitter almonds, or kernels of other species that contain amygdalin.

Sweet almonds are also used as a food (bitter almonds cannot be used in food).

Sweet almond oil
In cosmetics, expressed almond oil is used as an emollient, moisturizer, demulcent, emulsifier for chapped hands, in lotions (both moisturizing and night skin care preparations), suntan gels, blushers, makeup bases, skin cleansing preparations, and creams, and as an ointment base. The oil makes a film on the skin and slowly absorbs through the skin (for that reason it is widely used for massage oils). It has also an anti-wrinkle effect. It is used in cosmetic formulations in concentrations up to 50% and in lipstick formulations at 25%.

Almond blossom extract and sweet almond oil has demulcent and nutrient properties and is used as a skin cleanser and nutrient in face scrubs and masks to eliminate blemishes and blackheads and to enlarge pores from a neglected complexion.

Almond emulsions have, to a certain degree, the emollient qualities of the oil and have the advantage over the pure oil that they may be used with acute or inflammatory disorders.

Almond meal (made from ground sweet almonds); almond meal can be made both with whole or blanched (no skin) almonds) and sweet almond oil and is used as a skin cleanser and nutrient in face scrubs and also in medical soaps.

Almond oil and almond meal are non-irritating and non-sensitising to the skin and are considered safe for cosmetic use.

Sweet almond can be eaten safely, contrary to bitter almond oil, which is toxic since it contains amygdalin (amygdalin is hydrolysed to yield glucose, benzaldehyde (ingestion of 50-60 ml can be fatal due to central nervous depression with respiratory failure) and hydrocyanic acid (poisonous; and fatal to an adult after taking 7.5 ml orally).

Contraindications: allergy to almonds or its products.