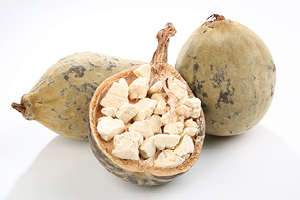 The Baobab (Adansonia digitata), is the most widespread tree species of the genus Adansonia, typically growing in dry, hot savannahs of sub-Saharan Africa. The trees usually grow as solitary individuals for 500 years or more. They can grow to 5–25 m high. Its most interesting features are its trunk and crown. The trunk is massive and accumulates water for dried season. Its greyish-brown or reddish-brown bark is fire resistant. The crown resembles roots, hence the common name ‘upside-down tree’.

During the early summer (October to December in southern hemisphere) the tree bears very large, heavy, white flowers. These are 12-20 cm in diameter and open during the late afternoon to stay open for one night. They have a sweet scent but later emit a carrion smell, especially when they turn brown and fall off after 24 hours. The flowers have 5 petals that are leathery and hairy on the inside.

Fruits are 10-40 cm long, with hard exocarp, covered with short yellowish grey hairs. The mature endocarp is white and powdery. Seeds are smooth and black.

Baobab seeds contain 12% of oil on average. The golden-yellow oil has a weak nutty odour.

History and/or folklore: Along the Zambezi river, the tribes believe that baobabs were upright and too proud. The gods became angry and uprooted them and threw them back into the ground upside-down. Evil spirits now cause bad luck to anyone that picks up the sweet white flowers. More specifically, a lion will kill them. In Kafue National Park, one of the largest baobabs is known as “Kondanamwali” or the “tree that eats maidens.” The tree fell in love with four beautiful maidens. When they reached puberty, they made the tree jealous by finding husbands. So, one night, during a thunderstorm, the tree opened its trunk and took the maidens inside. A rest house has been built in the branches of the tree. On stormy nights, the crying of the imprisoned maidens can still be heard. Some people believe that women living in kraals where baobabs are plenty will have more children. This is scientifically plausible as those women will have better access to the tree’s vitamin-rich leaves and fruits to complement a vitamin-deficient diet.

The Baobab seed oil provides emollient effects particularly useful in the care of dry, sensitive, inflamed and mature skin with an impaired barrier function. It has anti-inflammatory, regenerative and antioxidative properties due to lineoleic acid and phytosterols. The content of the later in baobab seed oil is very high, reaching up to 4%.

Baobab seed oil:
• Has a high content of vitamins A, D, E and F (essential fatty acids)
• Provides superb moisturizing benefits to the skin and hair
• It is quickly absorbed, improves elasticity, encourages regeneration of skin cells
• It is an excellent ingredient in formulations for eczema and psoriasis
• Extremely resistant to oxidation.
• Can replace argan, avocado oils