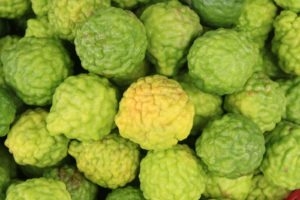 Botany: The Bergamot orange is a fragrant fruit of the Citrus a. bergamia, a small tree of the genus Citrus (family Rutaceae). It is a native hybrid, most likely of Citrus limetta ann C. Aurantium. It is native to tropical Asia (South East Asia), and is also found in the Ivory Coast, Morocco, Tunisia and Algeria It is now extensively cultivated in the Calabrian coast in southern Italy. The tree can grow up to four meters high, with star-shaped flowers and smooth leaves, bearing a fruit resembling a cross between an orange and a grapefruit, but with a pear-shape. The fruit ripens from green to yellow.

History and/or folklore: The name is derived from the city Bergamo in Lombardy, Italy, where the oil was first sold. The juice of the fruit was used in Calabrian indigenous medicine to treat malaria.

Products:
Citrus aurantium bergamia essential oil – Bergamot oil is a brownish-yellow or greenish oil with an aromatic bitter flavour and fragrant odour, obtained by cold expression of the peel from the fresh, nearly ripe fruit. It is also known as expressed bergamot oil from which rectified or terpeneless bergamot oil is produced by vacuum distillation or by selective solvent extraction, or by chromatography.

Citrus aurantium bergamia essential oil
The oil is one of the most widely used in the perfumery (used extensively in high-quality perfumes, especially eau de cologne) and the toiletry industry; creams and lotions, sun tanning preparations to stimulate melanin production (due to psoralen), and in soaps. This fresh smelling essential oil is a favourite in aromatherapy (it is good for creating a relaxed and happy feeling, relieving urinary tract infections, and boosting the liver, spleen and stomach). The oil is used for oily skin, acne, psoriasis, eczema, seborrhoea of the scalp, herpes, cold sores and wounds. The therapeutic properties of bergamot oil include analgesic, antidepressant, antiseptic, antibiotic, stomachic, anti-spasmodic, calmative, cicatrisant, deodorant, digestive, febrifuge, vermifuge and vulnerary activities.

It is also used to flavour Earl Grey tea.

The use of oil in food is restricted to those with coumarins removed, otherwise is the use of bergamot oil is banned or restricted in many countries owing to phototoxic effects.

Topical use of preparations containing bergamot oil has caused photosensitivity reactions owing to the presence of certain furocoumarins (bergaptene and possibly also citropten, bergamottin, geranial, and neral) in the expressed oil. Due to the photosensitizing activity of these constituents, the use of bergamot oil in cosmetics has caused hyperpigmentation of the face and neck. Recent cases of phototoxic reactions to the oil have been reported from its use in aromatherapy. When used with long-wave ultraviolet light, however, the same furocoumarins have been effectively used in the treatment of psoriasis, vitiligo, and mycosis fungoides. These substances (bergaptene and psoralenes) are known photocarcinogenics. Psoralenes penetrate the skin, where they increase the amount of direct DNA damage. This damage is responsible for sunburn and for increased melanin production. It can also lead to phytophotodermatitis. Even when the ingredient bergaptene (furocoumarin) is removed from the oil and phototoxicity is minimized, it is still advisable to keep treated skin out of the sun, and to use it in concentrations of less than 1 %.