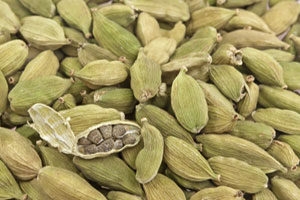 Botany: Cardamom or cardamon refers to several plants of the similar genera Elettaria and Amomum in the ginger family Zingiberaceae. Elettaria is commonly called cardamom, green cardamom, or true cardamom (Amomum is commonly known as black cardamom, brown cardamom, Kravan, Java cardamom, Bengal cardamom, Siamese cardamom, white cardamom, or red cardamom). Cardamom is a perennial reed-like plant with lance-shaped leaves borne on long sheathing stems, growing up to about 4 m high. A large fleshy rhizome is similar to ginger. The flowers are small yellowy with a violet tip. Oblong gray fruits follow the flowers, each containing many seeds. The plant is native to tropical Asia, and is now cultivated extensively in tropical regions such as India, Sri Lanka, Laos, Guatemala, and El Salvador.

The parts used are the dried, nearly ripe fruits with seeds.

History and/or folklore: Cardamom was well known in ancient times and the Egyptians used it in perfumes and incense and chewed it to whiten their teeth, while the Romans used it for their stomachs when they over-indulged.

Cardamom is broadly used in traditional medicine in India and in China as a stimulant, to treat infections in teeth and gums, to prevent and treat throat troubles, to treat urinary problems, inflammation of eyelids and also digestive disorders (carminative, stomachic, and laxative preparations). It also is used to break up kidney stones and gall stones, and was reportedly used as an antidote for both snake and scorpion venom.

The Arabs ground it to use in their coffee and it is an important ingredient in Asian cooking.

Elettaria cardamomum essential oil
The cardamom seed oil is mainly used as a flavour ingredient to flavour pharmaceuticals; and as a fragrance component in soaps, detergents, creams, lotions, lipsticks, hair-sprays, powders and perfumes. The oil is also used also as natural flavouring in liqueurs. The oil is widely used in massage and bath oils to provide a refreshing and uplifting effect for those feeling weak and mentally fatigued.

Available data indicate cardamom oil generally to be non-toxic, non-irritant and non-sensitizing. No mutagenic activity was found from cardamom in the Ames test.

In vitro tests have shown antimicrobial activity due to various constituents of the essential oil.

Cardamom oil has shown in vitro antispasmodic activity on isolated mouse and rabbit intestine. An aqueous extract of the seeds increases trypsin activity in a buffer solution.

Irritating to eyes. Sensitisation by skin contact has been reported by some individuals.