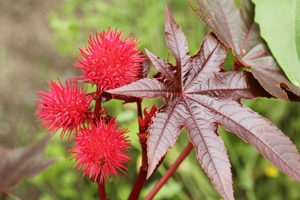 Botany: The castor oil plant is an annual herb that grows up to 5 m high in temperate zones and a perennial shrub or tree up to 15 m high in warmer climates. It is generally believed to be a native of Africa or India and is extensively cultivated worldwide.

The parts used are the ripe seeds.

History and/or folklore: In traditional medicine, castor oil has been used for centuries in India, Egypt and China as a cathartic, and externally for sores and abscesses, amongst others. Uses include bone deformities, limb paralysis, bedsores, bronchial catarrh, flatulence in children, mastitis during breastfeeding, tinea or seborrhoea of the scalp, scabies, warts, ulcerated feet, scalds, burns, eczema, conjuctivitis, sties, and reddening and irritation of the eyes. The oil has also been instilled into the ear to treat otitis and earache.

Castor bean (seed) contains a highly poisonous protein (ricin), which remains in the seed cake (pomace) after the expression of castor oil. Ricin is reported to contain 18 different amino acids and to have a molecular weight of 53,000-54,000. Steam or moist cooking of the pomace destroy the ricin. The seed also contains ricinine (an alkaloid), lecitins, and a very powerful heat-stable allergen.

Products: Ricinus communis fixed oil (castor oil) is extracted from the seeds of Ricinus communis. Cold pressing yields a colourless to pale oil while hot pressing and solvent extraction yield darker grades of oil, which are of lower quality. Castor oil is very stable and does not easily turn rancid

Ricinus communis fixed oil is a very glossy oil on the skin. It is used as an ingredient in lipstick, lip balms, lip salves, hair-grooming products, ointments, creams, lotions, transparent soaps, suppository bases, and others. It also cleans and softens the hair and is used as a hair wash for dandruff, to prevent falling hair and to grow new hair (where follicles are not totally withered). It has emollient properties on the skin and is soothing to the eyes. The oil is an effective rub for inflamed skin and bruises, and is used externally for ringworm, itches, piles, sores, and abscesses.

Castor oil facilitates the absorption of oil soluble anthelmintics and should not be used with them.

Castor seed is extremely toxic due to its content of ricin. The allergen present in the seeds can cause eye irritation, skin rashes, etc. However, ricin is not present in castor oil.