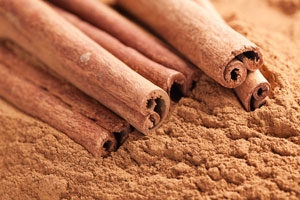 Botany: Cinnamon (C. verum) is a medium-size evergreen tree that grows to about 10-20 m high. The bark is thin, smooth, and pinkish-brown, the leaves opposite, elliptic or oval to lanceolate-oval. Flowers are pale yellowish-green. All species are native to Southeast Asia.

Parts used are the dried bark, leaves and twigs.

Cinnamon leaf oil contains high concentrations of eugenol (Ceylon type 80-88%; Seychelles type 87-96%). It also contains cinnamaldehyde, cinnamyl acetate, eugenol acetate, benzaldehyde, and others. A cinnamon leaf oil of Chinese origin is reported to contain only about 3% eugenol but has a high content of safrole.

Cassia, cinnamon, and their bark oils have been used either as flavours or tonic or counter-irritants in cosmetic preparations, including liniments, suntan lotions, nasal sprays, mouthwashes or gargles and toothpaste, among others.

Cinnamomum zeylanicum essential oil
Cinnamon bark oil is mostly used for fragrance and flavouring. The refreshing and cooling quality of the bark is due to the presence of methyl amyl ketone. Cinnamon oil (presumably bark oil) has anti-fungal, anti-viral, bactericidal and larvicidal properties.

Cinnamomum zeylanicum oil essential is not to be used in aromatherapy, as it may be harmful on the skin.