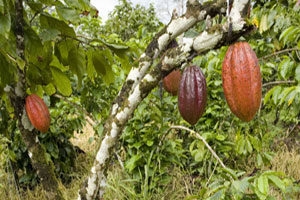 Botany: Theobroma cacao is a tree native to the Americas. It is an evergreen tree with leathery oblong leaves, and grows to about 8 m high. Fruits are berries borne directly on trunk and branches, with seeds within a mucilaginous pulp.

There are three varieties of cacao: Forastero, Criollo and Trinitario. Forastero accounts for more than 90% of the world’s usage and is produced primarily in West African countries (e.g. Ghana, Nigeria, Cameroon, and the Ivory Coast), while the Criollo variety is produced in Venezuela and Central America, as well as Papua New Guinea, Java and Samoa. Trinitario is believed to be a hybrid of the other two varieties and is produced in Venezuela, Trinidad, Sri Lanka and other countries.

Theobromine, the major alkaloid in cocoa, has similar pharmacological activities to caffeine. However, its stimulant activities on skeletal muscles are much weaker than those of caffeine, but it is stronger muscle relaxant.

Cocoa Butter contains triglycerides consisting mainly of oleic, stearic and palmitic acids. About three quarters of the fats are present as mono-unsaturates. It has excellent emollient properties.

Products: Three main types of ingredients are produced from cacao seeds: cocoa powder, cocoa butter, and cocoa extracts. Oil of Theobroma, or cacao butter, (incorrectly but commonly termed “cocoa butter”) is extracted from the roasted seeds of Theobroma cacao and is a yellowish white solid, with an odour resembling that of cocoa.

Traditional use: A traditional African remedy for dry skin, suitable for the most delicate of skin types. Cocoa butter is used to treat neck wrinkles on neck (turkey neck), around the eyes and at the corners of the mouth.

Cocoa butter is used extensively as an ointment base. It has excellent emollient properties and is used to soften and protect chapped hands and lips. It is used in preparations for rough or chafed skin, chapped lips, sore nipples, various cosmetics, pomatums, and fancy soaps.

Cocoa butter has been reported to have skin allergenic and comedogenic (forming blackheads) properties in animals.

Classified as not expected to be potentially toxic or harmful.

Not suspected to be an environmental toxin.