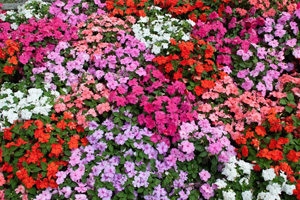 Botany: The Rose Geranium is a name given to a species of Pelargonium, and is confusingly not part of the Geranium genus. Pelargonium graveolens is a perennial erect shrubby, hairy, and glandular plant that grows up to 1 m high, becoming woody with age, with fragrant and deeply incised leaves. Flowers are pinkish in umbel-like inflorescence. It is native to South Africa, widely cultivated in Africa (Algeria, Morocco, Egypt, etc.) and Europe (Spain, Italy France, etc). The most widely commercially cultivated is the P. graveolens species, but other varieties and hybrids of Pelargonium are also cultivated to produce so-called geranium oils (P. graveolens, P. capitatum, P. radula, P. roseum, and P. odoratissimum).

History and/or Folklore: Geranium (Pelargonium graveolens) essential oil has been used as far back in history as ancient Egypt; the Egyptians used Geranium oil as a fragrance in perfumery and in medicine against cancerous tumours. Geranium was brought to Europe in the late 17th century and became popular during the Victorian era; fresh leaves of geranium were placed at formal dining tables and used as finger bowls. In the Victorian parlour, the potted Rose Geranium plant was placed on tables, where a fresh sprig could be obtained.

The geranium essential oil has a sweet and rosy smell with a mint overtone and is mostly colourless, but can have a slight light green colour to it. Other common names of the geranium oil are rose geranium oil, Bourbon geranium oil, or Moroccan geranium oil. The three major types of geranium oil (Bourbon, Algerian and Moroccan) contain large amounts of alcohols – 60-70% (L-citronellol, geraniol, linalool, and menthol), esters 20 30% (geranyl formate and acetate, citronellyl formate and acetate), aldehydes and ketones (L-isomenthone), sesquiterpene hydrocarbons (bourbonene, humulene) and alcohols, and acids (formic, acetic, propionic, etc.).

On the skin, rose geranium oil helps to balance the secretion of sebum and clears sluggish and oily skins, while the antiseptic and cicatrisant properties make this oil an effective aid to help with burns, wounds, ulcers and other skin problems. Rose geranium oil can also be diluted in shampoo to help with head lice.

The oil is very common in massage oils, bath oils, vaporizers, because it has a balancing effect on the nervous system (adrenal cortex); helps to relieve depression and anxiety, while lifting the spirits.

Geranium oil, used topically, is not indicated to cause any side effects, since it is non-toxic, non-irritant and generally non-sensitising, yet cases of contact dermatitis in hypersensitive individuals due to geraniol have been documented.

Cross-reaction of geraniol with citronella has been reported (but not with lemon oil).

It is not advised to use essential geranium oil in pregnancy. It is also inadvisable to use the oil for babies and young children.