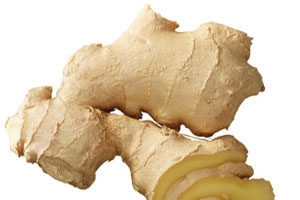 Botany: An erect perennial herb with thick tuberous rhizomes (underground stems) from which the aerial stem grows to about 1 m high, rarely flowers and produces seeds. It is native to southern Asia (India, China and Java). It is extensively cultivated in the tropics (e.g. India, China, Jamaica, Haiti, Philippines, Tahiti and Nigeria).

The part used is the pungent rhizome, commonly called ‘root’, both in fresh and dried forms.

History/Folklore: Ginger is one of the most highly esteemed spices/drugs from ancient times to the Middle Ages. The Greeks imported it from the East Coast centuries before Dioscorides described its medicinal use. Ginger was commercially important in ancient Athens and Rome. The Spanish imported ginger from Jamaica before the 16th century. In the Middle Ages, the Spaniards took it to Central America.

Rhizoma Zingiberis is the dried rhizome of Zingiber officinale Roscoe (Zingiberaceae). The rhizome contains 1–4% essential oil and an oleoresin. The composition of the essential oil varies as a function of geographical origin, but the chief constituent, sesquiterpene hydrocarbons (responsible for the aroma) seem to remain constant. These compounds include (-)-zingiberene, (+)-ar-curcumene, (-)-β-sesquiphellandrene, and β-bisabolene. Monoterpene aldehydes and alcohols are also present.

Ginger oleoresin contains mainly the pungent gingerols and shogaols as well as zingerone. Shogaols and zingerones are dehydration and degradation products, respectively, of gingerols. Shogaols have recently been found to be twice as pungent as gingerols.

Zingiber officinale essential oil
Externally, it is a rubefacient (produces redness of the skin by causing dilation of the capillaries and an increase in blood circulation) and it is used for rheumatic pains and as a stimulant of peripheral circulation in cases of bad circulation, e.g. chilblains and cramps. It is diaphoretic (promotes sweating). Ginger baths decrease muscle soreness and muscle stiffness. Ginger has been used for centuries as a cooking spice and medicinally demonstrates a diverse range of applications having biological properties such as the ability to modulate platelet aggregation, serve as an analgesic, anti-inflammatory and antimicrobial agent, and as an antioxidant.

Ginger oil is used as a fragrance component in cosmetic products, including soaps, detergents, creams, lotions and perfumes (especially oriental and men’s fragrances). Maximum use level is 0.4% reported in perfumes.

Zingiber officinale essential oil
Ginger oil is reported to be non-irritating and non-sensitizing in humans, and its low photo-toxicity is not considered significant.