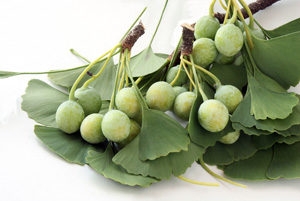 Botany: Ginkgo biloba, also known as Maidenhair tree, is a member of the Ginkgoaceae family. It is a monotypic deciduous tree growing up to 40 m. Leaves alternate or are borne on spurs in clusters of 3 5. They are parallel veined, broad fan-shaped, and up to 12 cm, with notch at apex, forming two distinct lobes. Ginkgos are dioecious (some trees being female and others being male). Male flowers grow on pendulous catkins with numerous, loosely arranged anthers in stalked pairs on a slender axis. Female flowers are in pairs on long foot-stalks. The drupe-like fruits have an acrid, foul-smelling pulp surrounding a single smooth, oval, thin-shelled, semi-edible nut (seed).

History and/or folklore: Ginkgo is known only from cultivation; it is a widely planted ornamental tree worldwide. The leaves are used in Western pharmaceutical products, while seeds and leaves are traditionally used in China. Leaves are grown on a commercial scale in China, South Carolina and Maryland in USA, and in the Bordeaux region in France.

Biochemistry: Folium Ginkgo consists of the dried whole leaf of Ginkgo biloba. It contains a wide variety of phytochemicals, including alkanes, lipids, sterols, benzenoids, carotenoids, phenylpropanoids, carbohydrates, flavonoids, and terpenoids. The major constituents are flavonoids of which mono-, di-, and tri-glycosides and coumaric acid esters that are based on the dominant flavonols, kaempferol and quercetin. Characteristic constituents of this plant material are the unique diterpene lactones, ginkgolides A, B, C, J, and M, and the sesquiterpene lactone, bilobalide.

Ginkgo biloba botanical extract
Traditional use: Long revered in traditional Chinese herbal medicine, ginkgo is now known to have important effects in the treatment of age-related disorders and circulatory problems (healthy circulation is important for the prevention and reduction of cellulite).

Leaf extracts are used in cosmetics including shampoos, creams, and lotions.