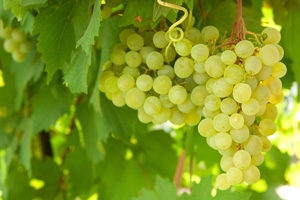 Botany: Vitis vinifera (common grape vine) is a species of Vitis. The wild grape is often classified as V. vinifera subsp. sylvestris (in some classifications considered Vitis sylvestris), with V. vinifera subsp. vinifera restricted to cultivated forms. It is a liana growing to 35 m tall, with flaky bark. The leaves are alternate, palmately lobed, 5–20 cm long and broad. Domesticated vines have hermaphrodite flowers, but subsp. sylvestris is dioecious (male and female flowers on separate plants) and pollination is required for fruit to develop. The plant is native to the Mediterranean region, central Europe, and south-western Asia, from Morocco and Portugal north to southern Germany and east to northern Iran.

The fruit is a berry, known as a grape that grows in clusters of 15 to 300 berries. Grapes are typically an ellipsoid shape resembling a prolate spheroid. In the wild species, the grape is 6 mm diameter and ripens dark purple to blackish with a pale wax bloom; in cultivated plants it is usually much larger, up to 3 cm long, and can be crimson, black, dark blue, yellow, green, orange, and pink. “White” grapes are actually green in colour, and are evolutionarily derived from the purple grape. Mutations in two regulatory genes of white grapes turn off production of anthocyanins which are responsible for the colour of purple grapes. Anthocyanins and other pigment chemicals of the larger family of polyphenols in purple grapes are responsible for the varying shades of purple in red wines.

History and/or Folklore: Grapes appear to have originated in the Mediterranean regions of southern Europe and Middle East. Going back thousands of years, the grape was a wild vine. Species were created through natural selection, resulting in mutations of the vine. Cultivation of the grape occurred in pre-historic or early historic times in southwest Asia or southern Transcaucasia (Armenia and Georgia), and cultivation of the domesticated grape, Vitis vinifera, spread to other parts of the Old World over the years. Wine is the fermented juice of grapes, and it has been used in various cultures for at least 4,500 years, originating most likely in the Middle East. Egyptian records, dating from 2500 BC, refer to wines, and there are frequent references to wine in the Old Testament. Wine was also used by early Minoan, Greek and Etruscan civilizations, and we can thank the Roman army for introducing the rootstocks and winemaking throughout Europe as they created an expanding Roman Empire. Centuries later, the role of wine for sacramental use in Christian churches helped to maintain the industry after the fall of the Roman Empire.

Commercial products: Grape skin extract (enocianina) is the colouring matter derived from the skin of certain varieties of the wine grape. It is commonly obtained by acidic aqueous extraction of fermented grape skin after the juice has been expressed from it.

The product should not be used on damaged skin (inflammation of the skin), around the eyes or on mucous membranes.

If there is inflammation of the skin, thrombophlebitis or subcutaneous induration, severe pain, ulcers, sudden swelling of one or both legs, cardiac or renal insufficiency, a doctor should be consulted.