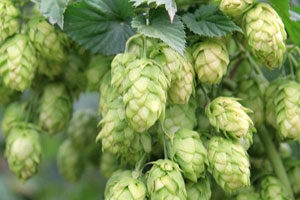 Botany: Hops derive from the dried strobiles of the hop plant, Humulus lupulus. This is a twinning perennial herb with male and female flowers on separate plants, which grows up to 8 m high. It is native to Eurasia and North America, and is extensively cultivated world-wide.

History and/or folklore: Hops were used by the ancients as a tonic. Hops were introduced to England by the Dutch in the 16th century. The common name is said to originate in Old English hopen or hoppan, meaning “to climb”. Its most well-known use is in beer brewing.

Product and Biochemistry: The hop contains β-sitosterol, estradiol, stigmasterol and oestrone. In addition, it contains many other materials that are known for their sedative and relaxing attributes. The hop contains plant hormones, particularly when very fresh, and these are similar to oestrogens.

Humulus lupulus botanical extract
Hop extracts have been reported to have various biological activities, including antimicrobial activities, which are due to the bitter acids (especially lupulone and humulone), the more hydrophobic ones being the more active.

Humulus lupulus botanical extract
Traditional use: It is antiseptic and healing. Some extracts are used as emollients in skin preparations (especially in Europe for their alleged skin-softening properties).

Skin irritant and allergen (allergenic activity in humans, causing contact dermatitis due to the pollen).