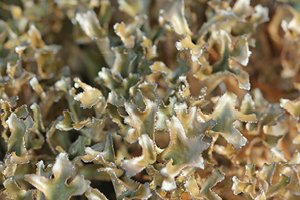 Iceland moss is a lichen. Lichens consist of algae and fungus growing together in a mutually helpful relationship. Lichens draw their nutrients from the environment and are easily contaminated. They grow on the lava slopes and plains of Iceland, whence it received its name. Most of the lichens in Europe were contaminated by the fallout from the Chernobyl nuclear plant accident, but Iceland received much less radioactivity, and the lichens were relatively safe.

It varies in colour from deep brown to greyish white and may grow to a height of 7 cm. The trough-shaped branches fork into flattened lobes that are edged with short hairs.

History and/or folklore: It is thought that Icelanders have been using Icelandic moss since the time of settlement in 874. The first mention of Iceland moss use in Iceland is in Jónsbók (Book of Laws) from 1281, which states that it is forbidden to trespass on other farms to pick lichens.
The Icelandic sagas also contain references to lichen picking expeditions where women and children went up on horseback into the mountains to pick it, with one adult man in attendance for supervision. They slept in tents and packed the lichen in skin bags – Icelandic Moss was a life-saver in hard times. Since grain growing in Iceland never took off due to the unsuitable climate and terrain, moss was their staple. The more moss that grew on a person’s property, the more valuable the land was considered.

Cetraria Islandica Extract is classified with having: Cleansing, Emollient, Smoothing, Soothing actions. It might also reduce the growth of bacteria.
It has been commonly used as a demulcent, forming a protective film over mucous membranes and providing extra moisture. Because it is a source of glycerol, it is used in the soap industry and in the cream manufacture.