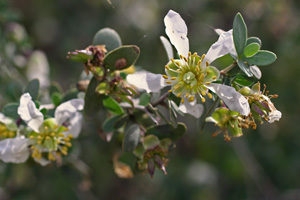 History and/or folklore: The Indians and Mexicans have used jojoba oil for long time as a hair conditioner and restorer and also as folk cancer remedy.

Products: The colourless and odourless oil is obtained from the seed by expression or solvent extraction and its “liquid wax” is treated as jojoba oil. Essentially the oil is triglyceride. It is a unique liquid mixture of long chain linear monoesters, fatty acids, proteins (albumin, globulin), polysaccharides, and small quantities of sterols.

Jojoba fixed oil, Jojoba butter
The oil is considered an excellent emollient, skin and hair conditioning agent and occlusive in shampoos, lipsticks, make-up products, cleansing products, face, body and hand creams and lotions, moisturizing creams and lotions.
The wax is used in the management of acne outbreaks and psoriasis.

Jojoba is readily absorbed by the skin and is miscible with sebum. As a result, it leaves no greasy after feeling.
It appears to be very effective in controlling transpiration water loss, having the water vapour porosity necessary to permit the skin to function normally while still providing an emollient effect. Jojoba effectively controls skin sloughing without the greasiness associated with occlusion such as petrolatum. As an added benefit, jojoba oil has been shown to significantly soften the skin as measured by viscoelastic dynamometry.

The oil has also been reported to exhibit anti-inflammatory activity. Jojoba oil has been used medicinally for the treatment of burns (sunburns), sores and chapped skin.

Jojoba wax beads are used as an exfoliating agent in facial scrubs, and body polishing.

Jojoba oil has been shown to be non-comedogenic (does not block pores), and non-antigenic.

Appetite-depressant, teratogenic activity has been reported.