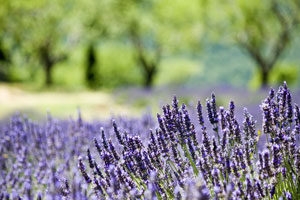 Botany: Lavenders are aromatic evergreen sub-shrubs with linear or lance-shaped leaves. It grows up to 0.9 m high. They are native to the Mediterranean region, but are cultivated elsewhere (France is the major producer). The parts used are the fresh flowering tops from which the essential oils are obtained by steam distillation and extracts by solvent extraction.

Lavandin is reported to have a higher volatile oil content than lavender and spike lavender. Due to its hybrid nature, the composition of its essential oil is much more variable than either of its parents.

Ursolic acid, also known as urson, prunol, micromerol and malol, is a pentacyclic triterpenoid compound that naturally occurs in lavender and many other plants. Ursolic acid and its alkali salts (potassium or sodium ursolates) were formerly used as emulsifying agents in cosmetic preparations. Its anti-inflammatory, anti-tumour (skin cancer), and antimicrobial properties make it useful in cosmetic applications. Ursolic acid may be of relevance in hair tonics to encourage hair growth.

Lavandula hybrids:
Lavandin, abrialis – is a lavender oil derived from a hybrid plant that combines the properties of Aspic and true lavender.
Lavandulin, grosso – is a hybrid between L. Officinalis and L. Latifolia and has a more herbaceous smell (some would say harsher) than some lavenders.
Lavandulin, sumian – is hybrid lavender which is camphoraceous with a stimulating woodiness. It is more rounded and smoother than some lavandins.
Lavender oil has been reported to have anti-microbial (anti-bacterial, anti-fungal) and anti-parasitic activities.

Lavandula angustifolia essential oil, Lavender oil
A few drops in a foot bath can relieve fatigue. Applied to the body it will act as a strong stimulant and may relieve various neuralgic pains, sprains and rheumatism, while in France it is used to treat painful bruises.

Lavandula latifolia essential oil, Spike lavender oil
It yields a higher quality of the oil but is perhaps inferior in odour. The oil has all properties associated with lavenders.

Lavandula hybrids:
Lavandin, abrialis – is said to be more effective than any of the other lavender types in reducing skin redness. Good for muscle aches and sprains and said to improve skin circulation.
Lavandulin, grosso – has the same skin calming properties as all lavenders.
Lavandulin, sumian – the soft oil has the same calming properties associated with lavenders.

All types of lavender products (especially essential oils) are used as a fragrance ingredients (some extensively) in cosmetic products, including soaps, detergents, creams, lotions, and perfumes (e.g., lavender waters and other colognes), spike lavender oil being more extensively used in soaps and detergents. The maximum use levels in perfumes are respectively 1.2, 1.0, and 0.8% reported for lavandin oil, lavender absolute, and spike lavender oil.

Lavender is irritating to skin and eyes. May cause sensitisation by skin contact.

Available data from one source indicate spike lavender oil, lavandin oil, and lavender absolute to be non-irritating and non-sensitizing to human skin, though lavender absolute has been reported elsewhere as a sensitizer. No human phototoxicity data were reported.

One source reports that the oil cause dermatitis and that more toxicological studies are needed.