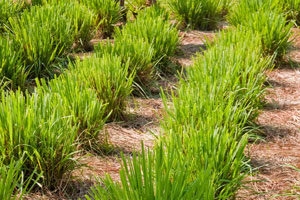 Botany: Cymbopogon citratus and C. flexuosus are perennial grasses both native to tropical Asia. C. Citrates is known as West Indian lemongrass and is cultivated in the tropics worldwide (major producers are Guatemala, Madagascar, Brazil, Malaysia, the Comoro Islands and Vietnam. C. flexuosus is known as cochin, East Indian, or British Indian lemongrass and has similar properties to C. Citrates. C. Flexuosus is cultivated mainly in western India and nearby countries. Leaf blades are linear, long, attenuated toward the base tapering upward to a long setaceous point ca. 90 x 0.6 cm, glaceous green more or less smooth, less rough upward. Parts used are the freshly cut and partially dried leaves of cultivated plants.

Products: Volatile (essential) oil is obtained by steam distillation of freshly cut and partially dried leaves. It has anti-microbial properties, especially against Gram-positive bacteria and fungi. It has analgesic, antinociceptive, and antioxidant properties. The antioxidant activity is displayed by some components such as citral and phenolic constituents.

Cymbopogon citratus essential oil
Lemongrass oil is an excellent general skin tonic and antiseptic, with a lemony aroma. It is also believed to soothe fevers, and to help relieve migraine. It is said to normalise overactive oil glands, and is therefore good for acne and open pores.

Lemongrass oil (especially C. citratus) is used extensively as a fragrance component in soaps and detergents. It is also used in creams, lotions, and perfumes, with maximum use level of 0.7% reported for both types of oil in perfumes.

Available data from one source indicate the oil to be mildly to moderately irritating to the skin of experimental animals but non-irritating and non-sensitising to human skin. Its phototoxicity on human skin has not been determined.