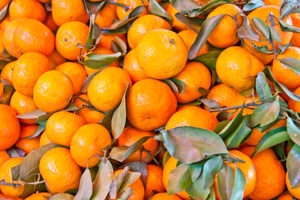 Botany: Mandarin (Citrus reticulata) is a citrus tree and fruit of the genus Citrus (family Rutaceae) and one of the three original species of the citrus genus, including citron (Citrus medica) and pomelo (Citrus maxima or C. grandis). The generally accepted theory is that all other types of citrus fruits are only hybrids that have developed over the centuries from these three species. The mandarin citrus became the most prominent and distinguished, since it is the only sweet of the three ancestors. The original type of mandarin (C. nobilis) came from Japan and China, but in the Mediterranean an earlier species came that was native to Indonesia and India (C. reticulata). Today there are dozens of species but they are cultivars that were made by man using selection and various production methodologies.

Mandarin is larger shrub, about 2 meters tall, although some species reach 4 meters. The leaves are small and very fragrant. The fruits are slightly flattened at the stem and can be easily removed from the branches. The peel is thin and fragrant. Peeled fruit has slices that can be easily detached from each other, are pale orange, very juicy and sweet. Adult trees yield 400 to 600 fruits.

The fruit is used fresh or for processing into jams and candied fruits. The peel is used to obtain the essential oil.

The essential oil is cold-pressed or expressed from the peel. It is

History and/or folklore:
The origin of the name mandarin dates back to early 19th century. The fruit was named mandarin because of its Chinese origin. It was well known that the Mandarins were important Chinese aristocrats. The fruit of the Mandarin tree was a traditional gift offered to the Mandarins, and it was natural that these new Chinese fruit should bear the same name, since these new breed of fruit was noble and relatively pale in colour.

In traditional Chinese medicine, the dried peel of the fruit is used in the regulation of ch’i, and to treat abdominal distension, enhance digestive and liver functions, and to reduce phlegm. Mandarins have also been used in Ayurveda (the traditional medicine of India). In France, Mandarin is used as a safe remedy for children for indigestion, hiccups and for problems of the elderly, such as digestive problems.

Citrus reticulata essential oil
The names mandarin and tangerine are both commonly used to describe the same essential oil; Mandarin is the common name used in Europe whereas tangerine is the name used in America. However, although they are the same species with the same botanical name, the fruit of the tree has very subtle differences in colour, shape and size.

The oil is described as anti-inflammatory, antiseptic, antispasmodic, cytophylactic, depurative, stomachic and tonic. It is also said to help with soothing the nervous system; calming, sedating (helping with anxiety, dizziness and nervousness). In a lotion or cream, it is used to help prevent stretch marks when pregnant, while increasing circulation and reducing fluid retention. Mandarin oil is also used in blended massage oils and baths and in burners and vaporizers.

Mandarine peel has shown antineoplastic activity in vitro, however, more studies need to be made to support the use of mandarin for any medical indication.

Mandarin is considered to be a very gentle and safe essential oil, when used correctly.

However mandarin cold-pressed oil can be phototoxic and would be best not to expose the skin to sunlight after a treatment with mandarin essential oil.