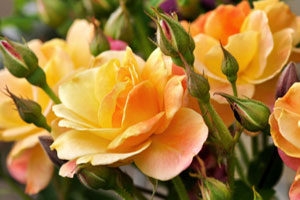 Botany: Small prickly shrubs up to about 1.2-2.4 m high. It is native to Europe and western Asia, and is widely cultivated. Parts used are the fresh flowers, from which rose oil is obtained.

Rosa damascena, which is more commonly known as the Damask rose or simply as “Damask”, or the Damascus rose, or sometimes as Rose of Castile, is a rose hybrid derived from R. Gallica and R. Moschata.

History and/or folklore: Legend says that the rose was borne from a drop of sweat that fell from the brow of Mohammed. It gave its name to the town of Damascus several thousand years ago, and to the silk made there in the colour of the flower.

For centuries, the Damascus rose (Rosa damascena) has been considered a symbol of beauty and love. The fragrance of the rose has been captured and preserved in the form of rose water by an ancient method that can be traced back to biblical times in the Middle East, and later to the Indian subcontinent. An Iranian doctor, Avicenna, is credited with the invention of the process for extracting rose water from rose petals in the early 11th century.

Products:
Rose oil – contains usually as its major components geraniol, citronellol, nerol, β-phenethyl alcohol, geranic acid and eugenol, which together make up 55-75% of the oil(with citronellol up to 60%). Other components present include terpene hydrocarbons, and esters.

Rose extract and rose oil have a host of beneficial effects on the skin and are good for promoting a youthful complexion with good tone, elasticity and an even-coloured complexion.

Traditional use: rose water is a valuable astringent and relieves tired eyes. Rose water, itself a by-product of the production of rose oil for use in perfume, is used as a component in some cosmetic preparations.

Available data from one source indicate rose oil (Moroccan, Bulgarian, and Turkish) to be non-irritating, non-phytotoxic to human skin, but slightly to moderately irritating to rabbit skin when applied undiluted.

Rose absolute (French) was non-irritating and non-phototoxic, but it produced one sensitization reaction in 25 subjects tested.