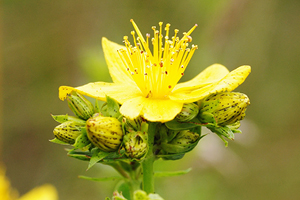 St John’s wort is a flowering plant in the family Hypericaceae. It is herbaceous perennial plant with extensive, creeping rhizomes. Its reddish stems are erect and branched in the upper section, and can grow up to 1 m high. The stems are woody near their base and may appear jointed from leaf scars. The branches are typically clustered about a depressed base.

It has opposite and stalkless leaves that are narrow and oblong in shape and 1–2 cm long. Leaves borne on the branches subtend the shortened branchlets. The leaves are yellow-green, with scattered translucent dots of glandular tissue. The dots are conspicuous when held up to the light, giving the leaves the “perforated” appearance to which the plant’s Latin name refers. The flowers measure up to 2.5 cm across, have five petals and sepals, and are colored bright yellow with conspicuous black dots. The flowers appear in broad helicoid cymes at the ends of the upper branches, between late spring and early to mid summer. The cymes are leafy and bear many flowers. The pointed sepals have black glandular dots. The many stamens are united at the base into three bundles. The pollen grains are ellipsoidal. The black and lustrous seeds are rough, netted with coarse grooves.When flower buds (not the flowers themselves) or seed pods are crushed, a reddish/purple liquid is produced.

The St. John’s Wort plant originated in Europe where it grew wild as a woody shrub. It was named after St. John the Baptist, as the flower bloomed around his birthday. In Old English “wort” means “plant.”
Today, it’s been successfully cultivated in other countries, including the United States, Russia and China. Fairly easy to care for, it’s a common favorite among backyard gardeners.

This flower is rich in flavonoids, which are famous for their antioxidant and anti-inflammatory benefits. Antioxidants and interleukins in St. John’s Wort decrease inflammation, thus are used by those suffering with aches and pains as well as skin conditions that cause inflammation.

When applied to the skin, St. John’s Wort treats burns and scrapes by boosting blood flow to the affected area. When in creams it helps keep open wounds clean by killing microorganisms. It has also been known to help sooth sensitive skin. Topical application of St. John’s Wort has shown to hydrate skin with its natural oils. Consistent application will firm up the skin, reducing the appearance of fine lines.