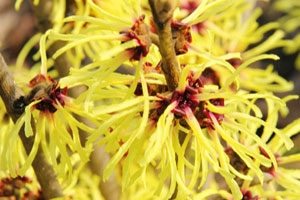 Botany:  A deciduous shrub or small tree flowering in the autumn.  It grows up to about 7.5 m high, and is native to North America.  Parts used are the dried leaves, bark, and partially dried dormant twigs.

In folk medicine, the extract is used to treat eye inflammations, insect bites, minor burns and other skin irritations, usually as a decoction, poultice or ointment.  Americans learned to use this extraordinary herb from the Indians who made a decoction from the twigs for swellings, inflammations and tumours.

Which hazel contains an astringent compound hamamelitannin, which is found in the leaves and the bark; also traces of a saponin and flavonoid.  Witch hazel water contains a trace of volatile oil consisting of eugenol, carvacrol, and probably similar compounds as the volatile oils of the leaf and bark. As it is steam distillate, it does not contain tannins.

Witch hazel water, which hazel bark extract, and which hazel leaf extract have all been reported to have astringent and haemostatic properties.  These properties can be attributed to the tannins contained in the leaves and bark, but it is not known what is responsible for these activities in witch hazel water.

Antioxidant, radiation-protective, anti-inflammatory, astringent, and haemostatic activity have been confirmed.

Witch hazel water, which hazel bark extract, and which hazel leaf extract are all used as an astringent and haemostatic in preparations (ointments, lotions, cloth wipes, etc.) for use in treating itching, irritations, and minor pains, with witch hazel water the most commonly used. They are also used in eye lotions, shaving lotions and other products.  Preparation can be used as a poultice for inflammation, a wash for bed sores, and a lotion for strings.  An ointment using witch hazel has been used for varicose veins, applied on a lint bandage and kept moist.

Witch hazel, either as a fluid extract or as a tincture, stimulates the circulation of the blood without causing irritation and is widely used in cosmetics as a skin tonic.

The medicinal qualities were understood by the American Indians.  The bark of this plant was used as a mouthwash to remedy gum soreness and inflamed throat areas. The aqueous extract of which hazel was used in shaving products.  A boiled solution of the plant is used as a massage to keep athletic legs toned and active.

The distilled extract of leaves and twigs is soothing when applied to a chapped or sunburn skin.  It can be used to eliminate pimples and blackheads. Hamamelis water is used as a cooling application and has been applied as a haemostatic.

Witch hazel has been used in the treatment of atopic dermatitis.

The external application of preparations of Hamamelis virginiana L. can be regarded as safe.

One test on carcinogenicity has been performed with an aqueous extract, where no carcinogenetic effect was identified.